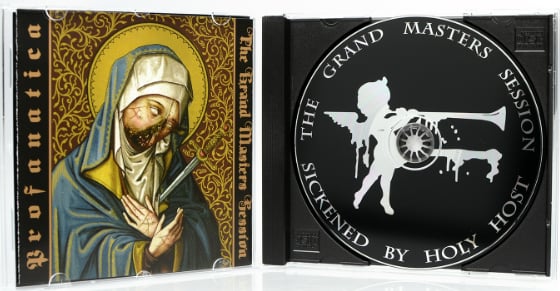 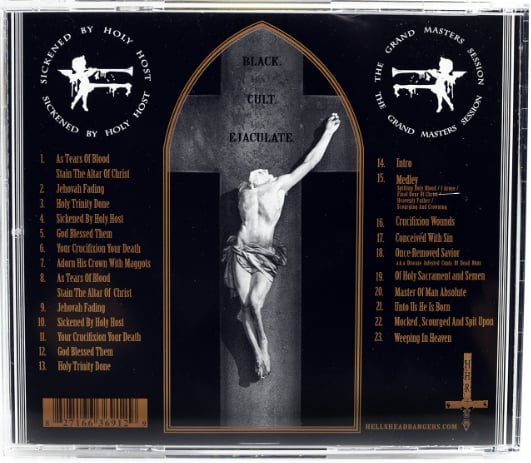 OUT NOW ON HELLS HEADBANGERS! 2016 edition now re-issued as a jewel case CD with re-worked layout.

The original purveyors of bleeding-raw Black Metal barbarity & mesmerizing filth; this is NOT a new PROFANATICA album! This oddity features an a 39 minute mini-album plus the "The Grand Masters Session" Box Set on CD. Nearly 80 minutes of true blasphemy & perversion.

PART #1 features 5 new songs plus 2 old classics written and recorded by Ledney with a session member. The performance on this work is much like their primitive NECROVORE-ous atrocities committed in the early '90s and allows for safe assumption of what could have been heard on their long-lost album, "The Raping of the Virgin Mary."

Meanwhile, PART #2 features the same titles but written and recorded by Gelso alongside the same drums & vocals performed on part #1. The execution of this session continues in the more musical direction showcased on their first 2 albums and incorporates soundscapes sonically compiled by the late Aragon Amori. The end result is nothing short of devastating, and the vast contrast between these two sessions takes on the form of an album in itself that is sure to appeal to both old & new devotees of the black cult.

Finally, "The Grand Masters Session" previously available as a vinyl-only 8" Box Set, is a raging 2008 "live in the studio" recording showcasing many of the classics, a few newer hits and an exclusive medley (a conglomerate of 5 songs). Absolutely mandatory for collectors, and those looking for a supplement to the raw PROFANATICA rehearsal demos ejaculated in the early 90's!